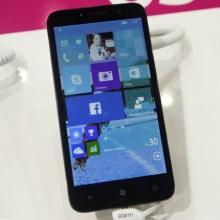 Fans of Microsoft’s Windows 10 mobile operating system have been clamoring for a smartphone that would become the true face of the platform. But truth be told, the current available Windows 10 smartphones out there, most notably Microsoft’s own Lumia 950 and Lumia 950 XL, as good as their specifications are, still leave some things to be desired. And it does not help that Microsoft seem to be reducing its efforts in promoting the flagship devices. For instance, during an event held in October of last year, the company appear to be putting more emphasis on its Surface Pro tablet and Surface Book laptop. Should Windows 10 fans look elsewhere for inspiration?

They may not need to look further than this year’s Consumer Electronics Show happening in the city of Las Vegas in Nevada, where Alcatel OneTouch is introducing its new Fierce XL with Windows 10 handset. Alcatel OneTouch has always been to sell budget friendly smartphone offerings, and true to form, the phone maker is selling the Fierce XL with Windows 10 for only $140.

With the Fierce XL with Windows 10, Alcatel OneTouch makes good on a promise made back in September of last year to produce a smartphone that runs on Microsoft’s mobile operating system. In 2015, the phone maker had hoped to announce a Windows 10 handset before the onset of 2016, but unveiling its newest device during the CES 2016 is not bad timing at all.

Apart from the Fierce XL with Windows 10, Alcatel OneTouch has plans to produce more Windows 10 devices in 2016, including a “superphone” that should contend with the Apples and Samsungs of the world (interestingly, Microsoft has similar plans). A tall order for sure, especially when one considers that the phone maker has always specialized in offering affordable smartphone options, not premium devices such as iPhones and Galaxy handsets. Then one must consider the popularity of the platform itself -- iOS and Android lord over the competition, and in order for Alcatel OneTouch’s device to attract attention, some appreciation for the Windows 10 OS is needed in the first place. It might be getting there -- Microsoft has claimed that over 110 million users have already installed Windows 10 in the first 10 weeks after it was launched back in July of last year.

As far operating systems go, Windows 10 actually offers the advantage of cross platform compatibility -- it could run the same mobile apps across different types of devices, no matter if they are smartphones, tablets, or PCs. This is Microsoft’s main selling point in promoting Windows 10 -- you can use it on almost any gadget.

To browse Alcatel OneTouch devices, you can start comparing phones and plans from Alcatel at Wirefly now.