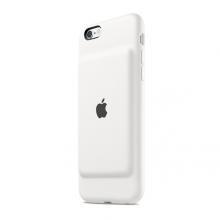 Apple just announced its new iPhone 6s Smart Battery Case, which should help iPhone users everywhere deal with the most common smartphone related problem in the mobile age -- making handset’s batteries last longer. Along with the extra power it provides for mobile users, the iPhone 6s Smart Battery Case also adds some bulge (as well as some extra weight) to one’s device. For those who are accustomed to slipping their iPhones neatly into their pockets, the battery case’s protruding part and added heft may need some getting used to.

The iPhone 6s Smart Battery Case is capable of increasing talk time up to 25 hours, video content playback up to 20 hours, and web surfing capacity on today’s high speed 4G LTE networks up to 18 hours. It is being offered at a price of $99 in the United States market, £79 in the United Kingdom, and AU$165 in Australia.

Battery cases for iPhone devices are nothing new. As a matter of fact, third party manufacturers like Mophie have long made battery packs for various models of iPhones. For Apple though, this marks the first time the mobile giant has actually made a battery case of its own, and is further proof that apart from its usual iPhones, iPads, iPod, and Mac products, Apple is indeed looking to diversify its current product line.

There has always been an inherent challenge to making battery packs for iPhones. Apple’s smartphones are designed to look elegant and sleek, but when paired with third party battery cases, the devices often end up losing some of their aesthetic. This is especially true of cases that sometimes transform iPhones into rubbery or boxy objects, instead of being stylish and streamlined gadgets.

For more information on the iPhone 6s Smart Battery case, you can go visit its official product page at Apple’s website.