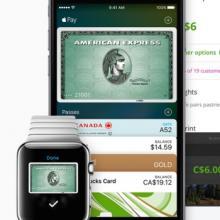 As reported earlier, Apple Pay was supposed to arrive in Canada this week. Well, it is now official -- Apple has made its mobile payment system available in the Canadian market. However, in order for iOS users living north of the United States border to start making use of Apple’s contactless mode of payment, they will have to own the exact right credit card.

For those living under a rock for the past year or so, Apple Pay is a system that basically allows owners of iPhones (an iPhone 6 model or newer) or an Apple Watch to pay for items they bought via near field communications (NFC) technology at retail stores that support the system. Apple had launched its Apple Pay system in October of last year in the US market. By July earlier this year, the iPhone maker was able to make its mobile payment system available for iOS users based in the United Kingdom.

Now, Canada joins the list as the third country in the whole wide world to have Apple Pay. However, the system may not be as widely available as mobile users think. For one, neither MasterCArd nor Visa will work with Apple Pay in the country. This is because Apple’s agreement is made only with American Express, and only those AmEx cards issued by this financial services company will support the iPhone maker’s mobile payment system (cards issues by Canadian banks, like Scotiabank for example are not included). And considering that American Express only represents a limited percentage of all credit card transactions in Canada, Apple Pay may be off to a slow start. As for the retail shops and business establishments that will initially support Apple Pay in Canada, they include McDonald’s, Staples, Tim Hortons, and Petro-Canada.

Back in April earlier this year, Apple had begun talks with six of the largest banking institutions in Canada, regarding a possible deployment of Apple Pay in the country by November of this year. But in order to get its Apple Pay to Canada, Apple had to bypass those banks and other major credit card companies because the discussions took so long.

Apple clearly has global ambitions for Apple Pay, and it needs to start realizing those ambitions, especially now that competition among mobile payments has intensified, thanks to Google’s Android Pay and Samsung Pay. But branching out to countries outside the US has proven to be a challenge for its contactless mode of payment. In America, Apple gets a cut of $0.15 for each $100 Apple Pay transaction. But in other countries, especially in China and Australia, banks are crying foul over the transaction cut.

Apple should still celebrate having officially brought Apple Pay to Canadians. It may be a small start for now, but it is certainly not a slide back, which still counts for something.