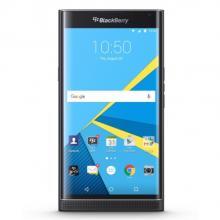 The Priv is a flagship device from the Canadian company. It is the first BlackBerry device that runs Android OS instead of their native software. And in true BlackBerry fashion, the Priv carries the signature full physical QWERTY keyboard on its slider. This gives the Priv a more dedicated market than the common Android devices that only come with a touch screen display.

Back in November, T-Mobile CEO John Legere said that BlackBerry “was on a comeback.” Before the market was saturated  by iPhones and Android devices, BlackBerry used to dominate over the industry. With the Priv, Chen is hopeful that this is the key for the company to make money in devices.

The Priv does sound promising, especially since it addresses the key problem found on the BlackBerry 10 device; which didn't do so well in the market. Now that the Priv uses Google's Android software, users of the device had access to more apps and games that they could use on their device. This was a key problem on the BlackBerry 10 since it had limited access to apps available on its software.

While Chen failed to disclose release date and price for the Priv, T-Mobile had already confirmed they will be selling the device starting on January 26th. The device will also be available on Verizon by the end of March. Sprint, meanwhile, has not yet responded on when they will start selling the Priv.

The Priv comes with a 5.43-inch AMOLED display with a resolution of 1,440 by 2,560 pixels and a 540 ppi pixel density. The screen has a curved edge screen and is covered with Corning Gorilla Glass 4 protection. From within its screen, a 64 bit hexa core Qualcomm Snapdragon 808 processor operates the device along with 3 gigabytes of random access memory (RAM), an internal storage of 32 gigabytes with a micro SD card slot for up to 2 terabytes memory expansion. The camera on the back is equipped with an 18 megapixel sensor with an f/2.2 aperture, OIS, and phase-detect auto focus. Meanwhile, on the front is a 2 megapixel camera with an f/2.8 aperture. The battery on the Priv is a non-removable 3,410 mAh battery built with Quick Charge 2.0 and Qi wireless charging on some models. Upon release, the device runs Android 5.1.1 Lollipop OS.

To browse more BlackBerry devices, you can further explore phones and plans from BlackBerry at Wirefly now.