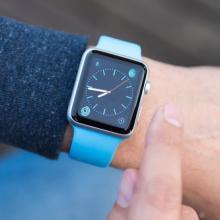 Another research firm is presenting proof that the Apple Watch, the first and only wearable device so far from Apple, is indeed dominating the worldwide market for smartwatches. Canalys recently published report indicating that the iPhone maker has managed to ship nearly 7 million units of its Apple Watch across the globe. And as the research firm notes, the almost 7 million unit volume only covers a couple of quarters, but is already noticeably higher than the shipments of all other sellers combined over the last five quarters. But alas, considering that Apple is yet to reveal official sales figures for its smartwatch, we can not know for sure if Canalys’ numbers is right on the money.

Wearable devices in general have been in the market for some years now. But they never quite reached the mainstream success that other mobile devices, such as smartphones and tablets, have enjoyed in the last decade. But when Apple released its own take on smartwatches in April earlier this year, consumer interest increased significantly, with some industry watchers even proclaiming that the Apple Watch will be the one to galvanize the entire wearables industry.

Obviously, we are not quite there yet. The popularity of wearable devices has surged in the last few quarters, yes, as other tech giants competing with Apple, such as Samsung, LG, and Motorola, just to name a few, started re-igniting their efforts in developing wearable devices. But in order to smartwatches to gain mainstream acceptance, they need to become devices that consumers can truly have a use for on a daily basis (and not just for health and fitness tracking purposes).

Still, the wearables industry does not necessarily lack in opportunities in getting more people to buy their devices. The upcoming holiday season should allow vendors a good time to showcase their respective smartwatches and other wearable device offerings. Apple is sure to attract plenty of buyers for its Apple Watch (the device is, after all, considered the most trendy smartwatch as of late), but the competition will be fierce. The iPhone maker will not only be dealing with the Samsungs and LGs of the world, but also from premium watchmakers, such as Tag Heuer and Fossil, who are planning to introduce their own smartwatches before the end of this year, just in time for the holidays.

As for mobile consumers actually interested in getting a wearable device, the upcoming holiday season may be the first one in which they actually are presented with a decent range of smartwatches to choose from. Sure, the Apple Watch will seem like the safest bet, but other sellers, especially those who have the new and improved Android Wear OS for wearables installed in their devices may beg to differ.