Consumer Advocates: T-Mobile’s Binge On Could Be Bad In The Long Run 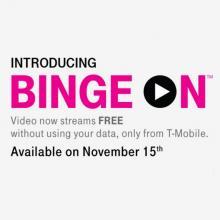 Once again, T-Mobile shook up the wireless industry with its latest announcements during its most recent Uncarrier event held in Los Angeles, California a few days ago. Apart from doubling the data on its Simple Choice plans and launching a new Family Match feature, the third biggest wireless carrier in America also took the opportunity to introduce Binge On, a service that basically allows subscribers to stream video content without affecting their data allotment. This new feature is about to go live this Sunday, with access to video content from 24 various sources, including familiar names such as ESPN, HBO, Netflix, and Hulu.

At first glance, Binge On sounds like a victory for mobile users, especially those who are fond of viewing video content on mobile. But various consumer advocates are starting to raise questions of whether services like Binge On could turn wireless carriers into mobile app gatekeepers, a notion that could hinder innovation of new services and even minimize options available to consumers in the long run.

Matt Wood is currently serving as the policy director of Free Press, a consumer advocacy group, and he believes that while the new Binge On feature is obviously beneficial to today’s consumers, he wonders why there is an existing data cap if T-Mobile can provide exemptions to whole categories of mobile applications.

Wood is not the only one questioning T-Mobile’s latest move. Various critics have also openly voiced their concerns on whether the practice of controlling which mobile apps are exempt from data caps and which are not is in violation of the Net Neutrality rules established by the Federal Communication Commission (FCC). The rules were created to ensure equal treatment of all kinds of traffic in the Internet, and service providers should have no control over which services and mobile apps consumers should use.

A number of industry watchers see T-Mobile’s Binge On feature as an example of zero rating, a practice wherein service providers do not count data usage for certain mobile apps against a mobile user’s monthly cap. According to the Net Neutrality rules, this practice is not expressly prohibited, with the FFC instead employing a case to case basis approach regarding the issue.

Critics have also bemoaned the fact that video streaming providers still need to adapt their service or get permission from T-Mobile to be included in the Binge On program. In the critics’ thinking, such setup does not foster healthy competition, and can potentially limit the number of options available to mobile users. Also, many are wondering why the wireless carrier is specifically targeting streaming video rather than including online video games and other data intensive services. Moreover, T-Mobile already offers a data plan that offers unlimited access to all mobile apps, so why does the wireless carrier need to provide unlimited data for particular apps?