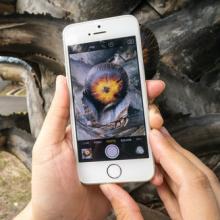 As it has done in the past, Flickr is ending this year by releasing its report on the most popular cameras being used by consumers today. Based on the information it has gathered, the image hosting services provider has declared the iPhone as the most widely used camera, with 54 percent of photographers taking full advantage of Apple’s smartphone in capturing images. Quite impressively, that percentage exceeds all the other camera brands combined.

Flickr’s data also offers proof of the ever growing popularity of mobile devices as the primary tool for taking photos. As indicated in its annual year end report, half of all the pictures uploaded to Flickr were shot using cell phones. The other half is distributed between camera categories such as DSLR (33 percent), point and shoot (12 percent), and mirrorless (4 percent).

It goes without saying that phones should have a bigger share of all the images shot by consumers everywhere. After all, almost every adult or teenager now own mobile devices, and a big percentage of those handsets are equipped with at least one camera. And even hardcore photography enthusiasts can not dispute the fact that the quality of cameras on some of today’s flagship smartphone cameras are good enough to serve as quick substitutes for DSLR and point and shoot cameras. Indeed, the rise of dual camera configurations, coupled with more powerful lenses and artificial intelligence (AI) driven camera software features have allowed iPhones to become formidable cameras in their own right.

And it is not just Apple that has stepped up in terms of delivering high quality image capturing results -- Huawei has joined forces with well known camera designer Leica for its smartphone’s cameras, and Google’s Pixel 2 flagships have deftly combined sound camera specs with clever use of AI to achieve ultra vivid imaging results.

But the iPhone seems to be the most preferred device when it comes to taking pictures. Per Flickr’s report, among the ten most widely used cameras, nine of them are on iPhones, with the top three spots claimed by the iPhone 6, the iPhone 6s, and the iPhone 5s. Interestingly, the only non-iPhone in the top ten is the Canon 5D Mark III, which sits at ninth this year. And remarkably, even though Canon did well to take the honor of being the second most popular camera brand this year, it only captured a 23 percent share of the top 100 devices. On third is Nikon with an 18 percent share.