Google’s Electronic Screen Protector: Letting You Know if Strangers Peep at Your Handset 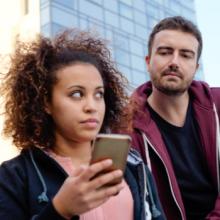 Google has been busy developing a new artificial intelligence feature that alerts mobile users when another person is peeping at their device over their shoulder. The feature is called the Electronic Screen Protector, and it was created by Hee Jung Ryu and Florian Schroff, a couple of researchers at Google.

Basically, what the Electronic Screen Protector does is combine artificial intelligence smarts with the latest in facial scanning technology to notify users that somebody else is looking at their device’s screen while they are texting, web surfing, or posting or browsing on social media. Strictly speaking, the feature is still officially in development, which means that consumers may still have to wait a while before they can start taking full advantage of this new tech. The creators, however, have posted a demo video on YouTube.

The idea behind the Electronic Screen Protector is as simple as it is inspiring. Privacy and mobile security are a big deal nowadays, simply because our smartphone devices have become, quite literally, an extension of ourselves, not only storing (or serving as a quick access tool to) information and memories, but also passwords, banking information, credit card data, and other sensitive stuff. And the fact that smartphone display screens are getting bigger may not be helping -- those with malicious intent could steal a glance at your device’s screen, and you would not have a clue it is happening, especially in a crowded environment, like inside the train, at the cafeteria queue, or at the street crossing.

Sure, front side cameras on smartphone devices are useful (especially for taking selfies), but with the Electronic Screen Protector, the selfie shooter is indispensable. Without the camera detecting peepers, the feature simply can not do its job. As seen in the demo video, the front side camera detects the peeper’s stare while the owner of the device is composing a text. As soon as a peeper is recognized, the phone’s screen changes automatically to show the front side camera’s view, and then makes clever use of a rainbow graphic to zero in on the peeper’s face. The screen then goes back to normal when the intruding visage looks elsewhere.

Creators Hee Jung Ryu and Florian Schroff are looking to showcase the Electronic Screen Protector feature during this year’s Neural Information Processing Systems (NIPS) Conference, which happens next month in the city of Long Beach in California. Google has not announced yet if the feature will hit handsets soon, but if it generates enough buzz in the weeks to come, there is no reason to think that it will not debut in smartphones eventually.

Meet the ZmBIZI Z2: A phone that pays you