HTC Extends Trade-In Offer For One A9 Smartphone 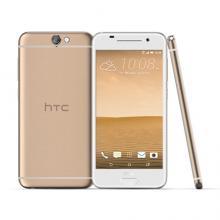 Itching to purchase HTC’s newest flagship device, the One A9? Now may be the perfect time to go buy the handset. That is because the Taiwanese phone maker has decided to extend its in-house smartphone trade-in offer through the holiday season and even until January of 2016. Specifically, from now until January 7th of next year, customers can trade in a qualified handset in exchange for the new One A9 smartphone. As for those who currently own a recent model of an iPhone, they can trade in their handset for the One A9 device absolutely free of charge.

HTC usually offers its One A9 flagship device for $499, and the company is assigning the exact same trade-in value for any one of Apple's iPhone 6, iPhone 6 Plus, iPhone 6s, and iPhone 6s Plus unit surrendered in exchange for the One A9. As for those who are thinking of trading in a Samsung Galaxy S6 or Galaxy S6 Edge device, they will get up to $200 back. For the LG G3 or G4, they will get up to $100.

In order to become eligible, customers will need to buy the One A9 from HTC.com at full price, and then request their prepaid US shipping label, and then follow the instructions provided by HTC. Also, it should be noted that trade-in smartphones must be in good working condition, which means that it should be able to power on and with no damages caused by liquid, nor any damage on the handset’s touch screen. Customers are to send their old handset to HTC within 30 days from the date of purchase, and they will get a check for the trade-in value within another 30 days. Those who purchase from HTC also get to enjoy free shipping and free Uh-Oh protection for their new One A9 unit.

For those not familiar with the HTC One A9 smartphone, know that it comes with a 5 inch AMOLED display screen with 1,080 by 1,920 resolution and 440 pixels per inch (ppi) and is complemented nicely by a 13 megapixel camera on the rear side and a 4 megapixel camera on the front side. Hardware wise, the HTC One A9 device features a 1.5 GigaHertz eight core Qualcomm Snapdragon 617 chip set, as well as the Adreno 405 graphics processing unit (GPU), plus 3 gigabytes of random access memory (RAM) and 32 gigabytes of onboard memory. It possesses a 2,150 mAh battery, and is powered by Android 6.0 Marshmallow, the latest version of Google’s Android mobile operating system. Want to compare the One A9 to other HTC devices? You can start comparing phones and plans from HTC at Wirefly now.