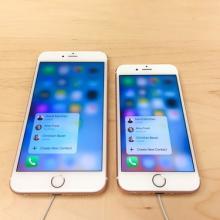 According to the latest report from research firm Kantar Worldpanel ComTech, it appears that Android is slowly eating away at Apple’s market share especially in smartphone markets in the United States and in Europe. Over a three month period spanning August, September, and October this year, the iPhone’s market share in the US dropped by 8.3 percentage points to 33.6 percent compared with the same period during the previous year. As for Android, it has seen its smartphone market share increase by 9.5 percentage points to 62.8 percent compared to the same period in 2014.

All throughout the European continent, Apple also experienced a decrease in its smartphone market between August and October, falling by 2.2 percent in France, 1.7 percent in Italy, and 0.6 percent for the top five European countries combined, which include France, Germany, Italy, Spain, and the United Kingdom. This marks the first time that the iPhone’s market share posted a decrease in the European market since August of last year. Still, Kantar believes that the overall decrease in market share in Europe is only minimal, likely attributed to the slowing down of growth in German and British markets.

Considering that 2015 is considered only an “S” year in terms of iPhone releases, many may expect Apple to encounter more challenges in the global smartphone market this year compared to other years. More than two thirds of the mobile giant’s earnings consist of sales generated from iPhones, and its latest release, the iPhone 6s, even though it is just an interim model, still did manage to become a best seller, grabbing the honor of being the third best selling smartphone in the US market during the quarter, despite some industry experts saying that consumers are less likely to purchase “S” iPhone releases.

Of course, Android smartphones provide pretty tough competition for Apple’s devices during the last quarter. Apart from increasing its market share in the US market, Android also managed to improve its market share across various key markets around the world. In European regions for instance, Android resumed its growth in the top five countries after experiencing a decrease in market share since October of last year, rising by 6 percent in Italy and 2.9 percent in France. Big credit for Android’s growth in the US and in key regions in Europe goes to strong showings from Android stalwarts such as Samsung and LG.