LG To Launch Its Own Mobile Payment System 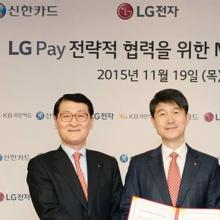 The world of mobile payment systems is already competitive. Apple got the ball rolling when it launched its Apple Pay system last year. And then in September of this year, two competing services -- Android Pay from Google and Samsung Pay from South Korean mobile giant Samsung -- officially landed in the United States market, further intensifying the competition. And now, LG has joined in on the fun, quietly revealing that it actually has plans to develop and then roll out its own take on contactless modes of payment. The new service will be called LG Pay.

As indicated on a post on its official Facebook page, the South Korean phone maker has made its announcement, revealing that it is collaborating with Shinhan Card and KB Kookmin Card in launching its new LG Pay mobile payment system. Few may be familiar with Shinhan and KB Kookmin, but know that these two are actually local banks based in LG’s home country, and they will be the first to support LG Pay.

It is quite obvious by now that LG is looking to deploy its upcoming LG Pay service first in its native homeland. For now, the South Korean mobile manufacturer has not revealed any details yet regarding an international launch or even a US market rollout for its mobile payment system. However, a spokesperson from LG has hinted that more information will be made available in the next few weeks.

For sure, LG Pay will have good chances of becoming popular in South Korea, where the LG brand is one of the most dominant names in mobile, just like Samsung. But when it comes to markets outside the country, LG Pay may face a more challenging time, especially when one considers that older services such as Apple Pay, Android Pay, and Samsung Pay have already gained some foothold, especially in markets such as the United States, the United Kingdom, and Canada. Even for Samsung, it is not a walk in the park -- it may be considered the biggest smartphone vendor in the planet right now, but finding success for its mobile payment system has proven to be a thing that is easier said than done.

It is not entirely the phone makers’ fault. Indeed, people are still reluctant to fully embrace mobile payment systems in general, because even in a rapidly changing world, consumers are still wary of newly introduced pieces of technology. And then there is the security part -- despite the assurances of companies who create contactless modes of payment, there are still people who do not trust these systems.