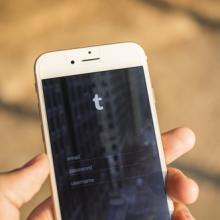 Here is some good news for blogging iOS users -- Live Photos taken using the iPhone 6s or the iPhone 6s Plus can now be shared on social media. Well, for starters, it is only on Tumblr for now, so for those users who currently have an account (or are planning to create one) on the blogging platform, they can now begin sharing Live Photos to fellow Tumblr users.

For those who are already familiar with Tumblr, they probably already know that the blogging site is a breeding site for all kinds of GIFs and animated images (courtesy of the endless armies of fandoms populating the Internet who are on Tumblr). As many may have already experienced first hand by now, GIFs are loads more fun (and addictive) when shared (and reshared) among friends and netizens.

Needless to say, Live Photos fits right in in the Tumblr-verse. This feature was one of many that were highlighted when the iPhone 6s and the iPhone 6s Plus were first announced back in September earlier this year. Basically, it allows owners of the two newest iPhone models to create animated GIFs whenever they capture images. The resulting animated pictures are about three seconds in length, and the cool thing about them is that they can come with sound (or sound effects), and can be viewed by users by long pressing any image taken using the upgraded cameras fitted on the latest iPhone devices.

GIFs are already pretty cool on the interwebs, but with Live Photos, Apple has essentially put the art (and fun) of GIF making directly into the hands of iOS users. And now that it is on Tumblr, Live Photos is poised to explode on social media. Just imagine if Twitter begins to support the iOS feature -- the social media universe will definitely burst with loads of hilarious three second long animated pictures.

When the Live Photos first debuted with the two new iPhone devices, some users wondered if they would ever see their animated images shared easily with friends and family, considering that Apple does not have its own network to support easy sharing of pictures taken via Live Photos. Well, now that it is on Tumblr, the GIF invasion has officially begun.

For good measure, the people behind Tumblr had also decided to include support for 3D Touch. Like Live Photos, the 3D Touch feature came with the release of the new iPhones. This piece of technology allows users to interact with the touch display screen in ways that are entirely beyond the usual tap, long press, and swipe gestures. The technology even incorporates pressure sensitive dynamics, which means that depending on how hard people tap on their iPhones, they can complete corresponding specific tasks.

How does the 3D Touch feature relate with the Tumblr update? Well, users can just press the Tumblr icon and then get a shortcut for search, which is kind of useful. On another person’s Tumblr username or avatar, users can generate a preview of their Tumblr by pressing it.