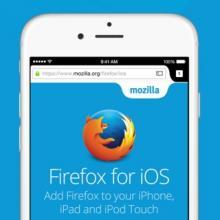 Yes, Firefox, Mozilla’s web browser, has now officially landed in iOS powered devices. Just recently, Firefox made its debut on Apple’s App Store as an iOS mobile app, effectively becoming the most recent major mobile browser to be made available to users who own iPhone handsets, iPad tablets, and iPod Touch devices.

Make no mistake about it -- among web browsers out there, Apple’s own built in Safari is still the default browser in the iOS environment. But recently, the iPhone maker has relaxed its hold on its mobile operating system, allowing rival Google to also offer its Chrome web browser to iOS users, as well as the Opera browser, albeit it has proven to be not as widely used as its competitors.

Firefox should be a welcome addition to the iOS platform, although some may remark that its arrival is a bit overdue. Moreover, with Apple’s Safari and Google’s Chrome already establishing their presence in iOS, Mozilla’s web browser may have a challenging time grabbing some adopters, especially from users already used to the other two earlier options.

Still, Firefox for iOS is worth checking out. Mozilla’s mobile browser offering has the ability to keep track of all open web pages using visual thumbnails, which gives users the advantage of seeing and jumping to any recently open web page. Users are able to launch as many tabs as they can without losing already opened pages, and each launched tab is numbered, so users can easily add and find web content for each tab.

Users on Firefox can also set up their default search engine, such as Google, Yahoo, or Bing, and even choose from Wikipedia, Twitter, and Amazon, just to name a few. They can also quickly switch from one search engine to another, which can come quite handy when cross referencing between web searches and social media.

As for those who want a bit of security when they are surfing the Internet on mobile, Firefox for iOS lets users launch a new web page in a private browsing mode. In this setup, history and cookies are not saved. Users are also given the ability to wipe out their browsing history, passwords, and other private information easily with just a single tap of the finger.

People who sign up for a Firefox account will be able to sync their browsing history, tabs, and passwords to Firefox for iOS from PCs and other devices that has the Mozilla web browser installed. For users who are fond of using different devices, Firefox also has the ability to keep track of all of their passwords for easy use across different handsets and gadgets. You like saving web pages for reading later? Firefox for iOS can do that for you, too.

Firefox for iOS is made available as a free download for iPhone, iPad, and iPod Touch device users, and is optimized for the big display screen of the iPad Pro tablet.