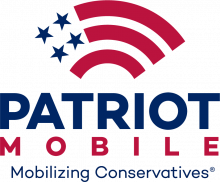 They say that there is a wireless carrier for every type of mobile user. While that statement itself may generally come to mean that there is a provider for every consumer’s wireless need, that basic idea might be expanded upon. Take Patriot Mobile, for instance -- it is a carrier that donates a portion of its customers’ subscriptions every month to a number of conservative organizations and candidates.

Patriot Mobile takes a portion of their profits and supports conservative organizations like the National Rifle Association (NRA), Americans for Prosperity (AFP), and the American Family Association (AFA). On top of that, Patriot Mobile also has cleverly struck a partnership with these same organizations, putting itself in a good position to serve the very members that make up these groups.

The story of how Patriot Mobile began is an interesting one. About half a decade ago, a progressive minded wireless service provider called CREDO Mobile spent millions of dollars in order to fight a number of conservative congressmen, including Joe Walsh and Allen West. CREDO had actually succeeded in doing so, and in turn, inspired the inception of Patriot Mobile in 2014, which is sort of CREDO’s equivalent, but one that supports the right wing instead of the left wing.

Patriot Mobile is proudly conservative, and it is even boasting that its number of customers are expanding fast. As indicated in its website, the carrier revealed that more and more conservatives are drawn to its main mission, which is to provide wireless service while at the same time, donate up to 5 percent of its proceeds on a monthly basis to conservative groups that its customers pick, and also, support issues such as the right to life, the Second Amendment, national defense and veterans, family values, and limited government.

With regards to its wireless plans, apart from the 5 percent donation, each plan also promises excellent coverage, no hidden fees, no roaming charges, and a 14-day satisfaction guarantee.

Patriot Mobile unlimited talk and text plans start as low as $20/month. They offer various Apple and Android devices for purchase, and you can also bring your own unlocked universal, or unlocked CDMA-compatible phone.

For those thinking of switching from another network to Patriot Mobile, know that Patriot is offering to buy their contract and give them up to $1,500 in credits.

What other deals does Patriot Mobile have? You can find out for yourself by browsing its official website.