Samsung Introduces The Galaxy A9 Smartphone 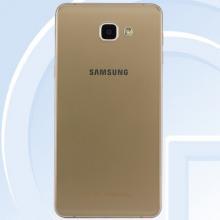 Samsung has officially unveiled its newest Galaxy offering -- the Galaxy A9 -- during its Galaxy A Party 2016 event held in China. As far as smartphones from the Galaxy A line of handsets go, the Galaxy A9 may be the most high end device, and certainly will please Samsung fans who are hoping for a smartphone that goes big in just about everything.

Samsung’s new Galaxy A9 devices features a gargantuan 6 inch Super AMOLED display screen that features a 2.5D curved glass and a resolution of 1,080 pixels. Some users may find the glass and metal aesthetics of the Galaxy A9 reminiscent of the South Korean phone maker’s other Galaxy A offerings, most especially the Galaxy A5 and the Galaxy A7, which were unveiled earlier this month, and also feature alongside the Galaxy A9 during the Galaxy A Party 2016 event. The huge display is complemented with a 13 megapixel camera on the rear side with OIS and f/1.9 aperture, and an 8 megapixel camera on the front side. Also, the physical home button of the smartphone is fitted with a fingerprint reader.

Inside its considerable frame, the Galaxy A9 handset features a 64 bit eight core Snapdragon 652 chip set, which is supported with 3 gigabytes of random access memory (RAM) and 32 gigabytes of onboard memory. For those who want more storage, know that the Galaxy A9 comes with a micro SD slot, supporting up to 128 gigabytes of additional memory capacity. Despite its size, the Galaxy A9 is actually only 7.4 millimeters thick. Samsung, however, has decided to put a might 4,000 mAh battery inside the device’s body, albeit the battery can not be removed.

Samsung’s new Galaxy A9 handset is powered with Android 5.1.1 Lollipop, and like other new smartphones from the South Korean mobile giant, it comes with Samsung Pay, the mobile payment system that Samsung introduced in July earlier this year.

With regards to availability details, the Samsung Galaxy A9 device will be made available in the Chinese market before the end of this year. Information on pricing though is not yet available of this writing, but should be made public in the days to come. There is no word yet when or if the Galaxy A9 will be released in other major smartphone markets around the world such as the United States or the United Kingdom.

Want to explore similar Samsung smartphones? You can start comparing phones and plans from Samsung at Wirefly now.