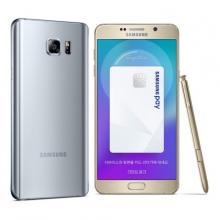 Samsung has officially announced that it will be offering a 128 gigabyte edition of its Galaxy Note 5 phablet. However, the world’s biggest smartphone vendor has made it clear that at least for now, this specific configuration of the Galaxy Note 5 will only be made available in the company’s home country, South Korea.

The Galaxy Note 5 Winter Edition which comes with 128 gigabytes of internal memory comes with a price of about $843, and is expected to be sold via a couple of wireless carriers based in South Korea, namely KT Corp and SK Telecom. The handset will be made available in two color choices -- Gold Platinum and Silver Titanium.

No doubt, industry watchers and casual consumers alike will see this latest move from the South Korean mobile giant as a way to address several complaints from mobile users about the regular edition of the Galaxy Note 5, which only features 64 gigabytes of onboard memory, and even does not come with an SD card slot for storage expansion purposes.

But now that Samsung is offering a 128 gigabyte edition of the Galaxy Note 5, its foremost 5.7 inch phablet offering should be in a good position to start competing with Apple’s 5.5 inch iPhone 6s Plus, which also features a 128 gigabyte edition. The only red flag for mobile users of the world is that Samsung is only making its Galaxy Note 5 Winter Edition available in the South Korean market (it is not made clear yet when or if the handset will be offered in other countries), while the iPhone 6s Plus is widely available in all major smartphones markets across the globe.

Is a larger internal memory capacity all that important nowadays? Absolutely. We now live in a world where we have a very wide range of mobile apps to download and install at our disposal. Furthermore, a social media driven culture has created a demand for bigger storage for photos and videos. Simply put in this day and age, we all need to have a smartphone that can provide enough space for our favorite mobile apps as well as stored files and media. Of course, people can always use the cloud in saving photos and videos, but doing so requires a Wi-Fi connection, and people generally do not want to use up the data allotment of their smartphone plans that fast.

Interested in other Samsung devices? You can explore more phones and plans from Samsung at Wirefly now.