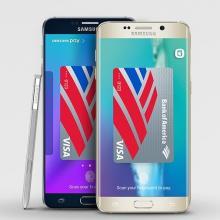 The biggest seller of smartphones in the whole world is planning to further expand its own mobile payment system in the United States in 2016, eventually letting mobile users do online shopping and even lengthening the list of mobile devices that support its contactless mode of payment to include even lower end Samsung handsets.

As explained by Thomas Ko, global co-general of Samsung Pay, during an interview, it is likely that lower priced smartphones from Samsung will begin having support for the South Korean tech giant’s mobile payment system by next year. Samsung Pay made its debut in Samsung’s home country, South Korea, in July earlier this year, on a very limited number of mobile devices which include the Galaxy Note 5, the Galaxy S6 Edge, the Galaxy S6, and the Galaxy S6 Edge Plus.

Regarding online payments, Ko commented that wider availability for Samsung Pay is coming soon, with the company targeting to include support for online payment processing starting in 2016. The Samsung top executive did not make any statement, however, regarding which other countries across the globe would the South Korean phone maker’s mobile payment system expand to.

In September earlier this year, Samsung Pay officially launched in the United States market. Because Samsung’s mobile payment system uses a piece of technology that is more widely used in stores in America, it may have an advantage over other high profile mobile payment systems, notably Apple Pay and Android Pay, which require business establishments to basically install new equipment.

With Samsung Pay, both new and old credit card terminals are compatible with the system, and do not require any complicated set up processes or special arrangements with retail companies, e.g. at Target or Wal-Mart stores, customers can just wave their Samsung devices installed with the mobile payment app. Moreover, once Samsung Pay offers support for online payments, it will truly be a force to reckon with, and will even compete with veterans such as PayPal, as well as new services like Visa Checkout.

Launched in September of last year, Apple Pay may have been the first high profile mobile payment system to attract wide attention, but the fact that Apple's system requires retail establishments to install equipment supporting near field communications (NFC) technology may have served as an obstacle for achieving a better adoption rate among businesses in the US.

Still, generally speaking, mobile payment systems are not that widely accepted yet, despite the success achieved by Samsung Pay and Apple Pay. But by expanding the capabilities of its mobile payment brand, Samsung just might change all that.