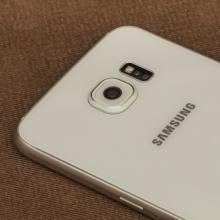 During an investor conference held in South Korea a few days ago, Samsung took the opportunity to officially reveal some information regarding its next flagship smartphone camera sensor. Designated at BRITECELL, the new smartphone camera has the distinction of offering more and finer pixels but in a sensor that has a smaller size. With the use of some very smart pieces of technology, the South Korean tech giant’s new smartphone camera sensor has the ability to deliver images that not only are sharper, but also brighter and capable of displaying more, distinct colors, even in conditions with minimum lighting.

Samsung has specifically developed its BRITECELL smartphone camera sensor to display better looking pictures even in darker environments. The company achieved this by doing without the Bayer filter layout routinely preferred by typical smartphone camera sensors. For those not familiar with the technology, the Bayer filter layout basically has the ability to transform pixels into green, but at the same time, also causes some of the light to be blocked, hindering it from hitting the sensor properly. In order to allow more light into the sensor, Samsung has decided to eliminate these green pixels altogether, and elected to replace them with white colored pixels.

The direct result of the substitution by the white colored pixels is that more light can now get inside the sensor. This now gives Samsung the ability to develop a camera module that features a lot more pixels that are also smaller in size. As a matter of fact, Samsung’s new BRITECELL smartphone camera sensor is capable of featuring up to 20 million pixels measuring 1µm. Now compare that to the 16 megapixel cameras being used right now with 1.12µm pixels. Moreover, the process in which these new BRITECELL smartphone camera sensors are produced has made it possible for camera modules in smartphones to become thinner by 17 percent, which means that mobile users may even expect camera not to protrude from the rear side of upcoming smartphone models in the near future.

And this is not all -- Samsung has also managed to improve on technology related to image processing. Aiming for increased dynamic range, Samsung has developed Smart WDR, which actually is similar to HDR in the sense that it takes multiple exposures and then combines them to produce a bright, colorful picture. Then there is also a new phase detection auto focus (PDAF) system, which has the ability to correctly and rapidly focus on objects, even when they are not stationary, or are located in some fair distance.