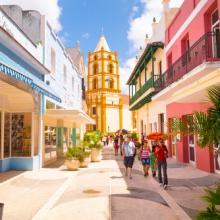 Sprint recently just signed a direct roaming agreement with Telecommunications Company of Cuba (ETECSA), effectively becoming the first ever wireless carrier in the United States, major or otherwise, to do so. According to Marcelo Claure, the chief executive officer of Sprint, the steadily opening commercial relationship between the US and Cuba is sure to bring many travelers to Cuba, and the wireless carrier is looking to make sure that Sprint customers who do visit the island nation can have access to roaming privileges.

Claure revealed the official signing of the agreement at a ceremony held at Havana, the national capital as well as the biggest city in Cuba. The Sprint head honcho was in attendance as part of the US - Cuba Business Council (USCBC) delegation sent to the largest island nation in the Caribbean region. For those not in the know, the USCBC is an advocacy group at the US Chamber of Commerce. It also serves as a formal commitment by the overall community of businesses and merchants in America to establish a more strategic and two way trading relationship between the US and Cuba.

By signing the direct roaming agreement with Cuba, and in effect, inking a direct long distance interconnection agreement with Cuban telecoms provider ETECSA, Sprint now paves the way for more wireless carriers from mainland America to forge telecommunications deals with Cuba in the years to come.

Visitors to Cuba from around the world are expected to reach over 3 million in number this year. Within a span of a decade, this figure is expected to increase to over 5 million visitors. Sprint made a wise move in becoming the first to begin to take advantage of this trend. Not that Sprint does not have any previous connections with Cuba before. Some may remember that back in April earlier this year, Sprint’s prepaid subsidiary, Boost Mobile, launched the first prepaid plan for mobile users based in or around the Miami metropolitan area calling to Cuba. And then in June also this year, the wireless carrier and another of its prepaid arms, MetroPCS, introduced new plans for customers who have family, friends, or business contacts based in the island nation.

For Sprint, signing a direct roaming agreement with Cuba also ties up neatly with the wireless carrier’s launching of several international mobile services in 2015. These include Sprint Global Roaming, and just this August, the announcement of Sprint Open World, which aims to improve better connectivity in Mexico, Canada, and other other countries in the Latin American regions. Interested to know more about Sprint’s services? You can explore plans and phones from Sprint at Wirefly now.