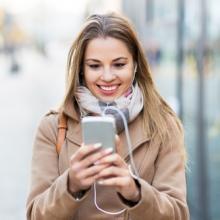 T-Mobile continues to beef up the list of service covered in its Music Freedom feature. The third biggest wireless carrier in the United States has just announced that it has added eleven new music streaming service providers to Music Freedom’s current roster of supported services. This means that for subscribers under T-Mobile’s Simple Choice plans, they will now be able to stream music from the following new service providers without affecting their monthly high speed data allotment:

The 11 new additions to T-Mobile’s Music Freedom serve to further widen the current range of music services already supported by the feature, which already offer plenty of dance music, hip hop and other musical genres, as well as diverse audio programming that includes public affairs and access to NPR via KCRW. Furthermore, the addition of TuneIn Premium lets music loving subscribers of T-Mobile to stream over a hundred thousand radio stations, plus 5.7 million available podcasts.

With the addition of 11 new services, T-Mobile’s Music Freedom feature now allows subscribers to choose from 44 digital music streaming service providers, and they can do so without ever worrying if their data allowances will be affected. The 11 new services now join familiar names such as Spotify, Apple Music, Pandora, Google Music, Rhapsody, iHeartRadio, and Slacker, among many others, all accessible via Music Freedom.

Ever since T-Mobile introduced its Music Freedom feature back in 2014, it has grown from a simple Uncarrier launch that included only seven music streaming service providers, into a major plan offering that now covers over 95 percent of all music streaming services availed of by US mobile users. As revealed by T-Mobile, its Music Freedom feature now allows its subscribers to stream over 196 million tracks every day, and it is all completely done without affecting the mobile user’s data allowance.

T-Mobile is making its Music Freedom feature available absolutely free of charge to all subscribers under any of the wireless carrier’s Simple Choice and Simple Choice Amped plans, along with the brand new Binge On feature, which allows for unlimited streaming even on video content services. Similar to the Music Freedom feature, the Binge On feature lets subscribers stream from a certain number of service providers, including Netflix, DirecTV, Hulu, Movieplex, and Hulu, just to name a few, without affecting the mobile user’s data allotment.

Interested about other T-Mobile offers? You can start comparing plans and phones from T-Mobile at Wirefly now.