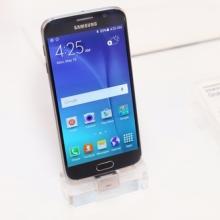 And the Samsung holiday deals keep on coming. TextNow Wireless, a mobile virtual network operator (MVNO) that uses the network of major US wireless carrier Sprint, has announced that it is selling the Samsung Galaxy S6 smartphone for only $249.99, sans any contract. The Galaxy S6 device is offered in both gold and black color options, with 32 gigabytes of onboard memory. Considering that the normal price for the Galaxy S6 at TextNow Wireless is $599.99 upfront, customers who take advantage of this latest Christmas special offer from the mobile service provider will get to enjoy savings of $350, which is a discount equivalent to almost 60 percent. This offer is made available by TextNow Wireless from until New Year’s Day. It would be a wise decision to act now because the wireless carrier only has a limited number of handsets in stock.

But wait -- there must be a catch somewhere, right? Well, the Samsung Galaxy S6 device being offered in the deal is actually certified refurbished, which means that it is not technically brand new (i.e. straight out of the box). Still, a Galaxy S6 smartphone that has been certified refurbished is essentially a new device, except maybe for its pricing -- you still can expect the same quality performance, the same features and functionalities, a refurbished look, and if there are problems, the device is still covered by a full year’s warranty.

Not all may be fully acquainted with TextNow Wireless. This wireless carrier holds the distinction of being one of a few network service providers that prioritize Wi-Fi connections, with backup from Sprint’s 3G and 4G networks. TextNow Wireless offers smartphone plans starting at prices as low as $18.99 a month, and already come with unlimited voice calls, text messaging, and 2G data on all plans, with LTE data allotments starting from 500 megabytes a month (up to 4 gigabytes on the $59.99 plan).

Customers who avail of TextNow Wireless plans get their voice call and text messaging service via Wi-Fi connections where there are available. In the absence of any working Wi-Fi network, they can rely on Sprint’s network as the backup. As for those who want to bring in their own handsets to a wireless plan, they can do so with TextNow Wireless as long as their smartphone is compatible with Sprint’s network.