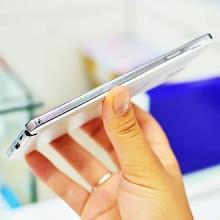 As explained by Monica Wong, the author of the report, it is interest in phablets is really evident nowadays, but it bears noting that a device that fits the hand of the mobile user is still ideal, regardless of the actual size of its display screen. Indeed, in previous surveys, Strategy Analytics had discovered that handsets that featured a slimmer bezel, optimizing display screen, while still comfortable fit in the mobile user’s hands, are actually more appealing to people in general.

Wong further added that even if the slimmer 6 millimeter handsets drew interest initially among mobile users, these same people were actually willing to sacrifice slimness in exchange for a longer lasting battery when they were told that they can expect to get more battery life (about a third more than the usual) with a bulkier handset (that is, 8 millimeters). This only goes to show that people will trade anything so that their mobile devices can keep up with their fast paced daily life.

To view the full report, you can go visit the official website of Strategy Analytics.