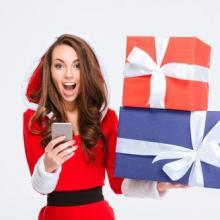 Not to be outdone by rival T-Mobile (which recently unveiled its holiday deals), Verizon Wireless is also introducing a holiday deal of its own. Indeed, the biggest wireless carrier in the United States has just revealed that it is offering a couple of extra gigabytes of LTE data every month to existing subscribers of any qualified Verizon plan, or to customers switching from rival wireless carriers who decide to upgrade. Mobile users will no doubt be delighted to know that the bonus 2 gigabytes of LTE data is absolutely free of charge and shareable, and subscribers can enjoy it for as long as they can as long as they stay signed up under a Verizon plan. To avail of this promotion, customers must upgrade or switch from now until January 6th of next year.

Specifically, this special holiday offer from the Big Red applies to existing subscribers who are upgrading on Verizon’s XL and XXL plans, as well as to new customers who are activating a device on either plan option. For those not in the know, the wireless carrier’s XL plan is made available at $100 a month, plus line access fees, and usually comes with 12 gigabytes of LTE data (now boosted to 14 gigabytes of data in total with the bonus 2 gigabytes). As for the XXL plan, it includes 18 gigabytes of LTE data (now increased to 20 gigabytes with 2 extra gigabytes) and is priced at $120 per month, with line access fees of $20.

Those subscribers who are under a multi-line plan, they can share the bonus gigabytes of data across all lines of service, plus they can add up to 10 members per account). Customers can claim their 2 gigabytes of data for each line of service they upgrade on their Verizon Wireless plan. This means that for a family or group consisting of four members, they can go from sharing 12 gigabytes of data every month to 20 gigabytes without having to pay extra.

As for those who prefer having even more LTE data, Verizon Wireless will be honoring the bonus 2 gigabytes of data on its bigger plans, i.e. plans that start at $140 a month for 20 gigabytes of data (now boosted to 22 gigabytes with the extra 2 gigabytes). Note that all qualified Verizon plans already come with unlimited voice calls and unlimited text messaging.

Because this holiday deal from Verizon Wireless requires a new handset, current subscribers of the Big Red who are not qualified for upgrades (or those with no plans of upgrading) will not be able to take advantage of the offer. Also, those under smaller Verizon plans, like the 6 gigabyte Large Plan or the 3 gigabyte Medium plan are not eligible. For more Verizon Wireless deals, you can browse plans and phones from Verizon Wireless at Wirefly now.