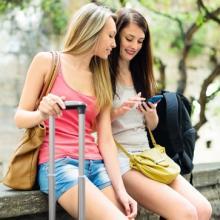 Here is some good news for subscribers of Verizon Wireless who frequently travel to other countries. The Big Red has officially announced a new service called TravelPass, which basically allows Verizon customers to be able to make use of their smartphone plan’s voice call minutes, text messaging, and data while going to places outside of the United States. Even those subscribers with unlimited voice call minutes and text messaging inclusions will be able to use take advantage of those wireless inclusions while abroad.

There has been so much talk about the concept of globalization in the past couple of decades or so, but when it comes to enjoying your smartphone plan’s privileges when traveling abroad, today’s wireless carriers have been slow to catch up to the times. But industry watchers are observing now that these carriers are beginning to keep. As more and more network providers start to improve their international features, the days of painfully high and inconsistent international roaming fees could be over.

An example is T-Mobile, which offers free text messaging and data abroad, despite the fact that the data is only on 2G speeds (with customers having the option of paying more for faster connections). In July earlier this year, the wireless carrier announced that its customers can use their smartphones while traveling to Mexico and Canada sans roaming fees, courtesy of its Mobile Without Borders feature.

As for subscribers of Verizon Wireless, they used to have to purchase expensive new plans when traveling abroad. Indeed, the usual smartphone plan for going to Canada and Mexico offers 500 voice call minutes, 500 text messages, and 1 gigabyte of data, all available for $25. For other countries, the plans were even pricier, and only offered lesser data. Without using a plan, customers could expect to pay $2.99 per voice call minute, and $2 per data megabyte.

This is why the new TravelPass feature is such a welcome development. Subscribers of Verizon Wireless can activate it simply be enabling international services on their account on the wireless carrier’s official website, or via its mobile app. When a user starts making calls, sends text messages, or uses data abroad, the daily TravelPass is activate for the next 24 hours, and the fee is charged. As for those who do not want the feature to be activated, they can just disable TravelPass via the mobile app or Verizon’s website, or set their handset to airplane mode, and then just make use of Wi-Fi.

For more Verizon Wireless offers, you can explore plans and phones from Verizon at Wirefly now.