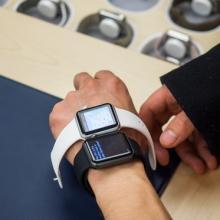 Research firm IDC has just published its latest sales figures for wearable devices, and it appears that familiar names continue to lead in terms of sales volume and market share. The year 2015 saw the release of the highly touted Apple Watch, as well as interesting offerings from players like Tag Heuer which ventured into smartwatch territory for the first time. Still overall, the sales of wearable devices this year rose 200 percent in the last three months as compared to the same period one year ago, with total shipments of wearables reaching the 21 million mark.

Wearable devices are still far from being mainstream gadgets, but the impressive increase in sales may be a sign that more and more consumers are indeed purchasing smartwatches, fitness trackers, and other wearables. Fitness trackers, such as those made by Fitbit and Garmin, still outsell smartwatches, but apparently smartwatches are poised to get big, especially in terms of market share, and may eventually give fitness trackers a run for their money.

Of course, this is made possible with Apple’s introduction of its first and only smartwatch device to date, the Apple Watch. This year, Apple has managed to become the second biggest manufacturer of wearable devices in the world, earning 18.6 percent market share by shipping 3.9 million units of the Apple Watch. So who remains at the top? That honor goes to Fitbit, increasing its shipment volume from 2.3 million units to 4.7 million units, albeit its market share has shown some slippage due to the Apple Watch’s strong sales showing.

Rounding off the list of the top five wearable makers in the world are Xiaomi, the aforementioned Garmin, and XTC. The presence of two Chinese phone makers in the top five is certainly interesting, even more so when one considers that XTC knocked off South Korean mobile giant Samsung from the list. This year, XTC had released its first wearable device (a watch phone for kids), and went on to ship 700,000 units in the Chinese market (the only country it sells its products to).

IDC believes that other new players eager to join in on the wearables fun will not find it hard to introduce their own product offerings. The reason is that there is plenty of room price wise in the industry, with the average fitness band priced at $94 and the average smartwatch priced at $400. Also, the research firm projects that the growth of wearable devices will not slow down any time soon. IDC predicts that by 2019, shipments of wearable devices worldwide will hit 126 million yearly.