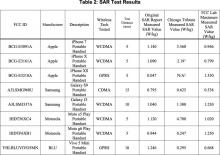 The Federal Communications Commission (FCC) released an announcement today that debunked a report made in August. According to the FCC, smartphone models manufactured by Apple and Samsung did not violate their rules on the maximum exposure levels of radio frequency.

Today’s report tackles the report made by The Chicago Tribune, which suggested that certain iPhone models emitted radio frequency radiation that went beyond the safety limits implemented by the government agency. The publication conducted an investigation through an accredited lab that it hired. Together, they tested a number of devices, including iPhone models. The investigation showed that these devices violated the federal guidelines.

When the report was made, Apple disputed the claims and said that there was an inaccurate testing “due to the test setup not being in accordance with procedures necessary to properly assess the iPhone models.” Apple iterated that all of their devices had gone through full certification from the FCC and in each country where these devices were being sold. They promised that they are compliant and have met all the exposure guidelines and limits.

The FCC also responded to the investigation and conducted its own testing of the devices in question. And based on its findings, the FCC disagreed with the publication. The agency conducted a test on the iPhone 7, iPhone X, and iPhone XS devices. They were able to acquire these models from the open market along with the ones provided by Apple. They concluded that the findings that The Chicago Tribune obtained from its own testing produced different results.

“All sample cell phones tested by the FCC Laboratory, both grantee-provided and FCC-purchased samples, produced maximum 1-g average SAR values less than the 1.6 W/kg limit specified in the FCC rules. Therefore, all tested sample devices comply with the FCC RF radiation exposure general population/uncontrolled limits for peak spatial-average SAR of 1.6 W/kg, averaged over any 1 gram of tissue as specified in 47 CFR Sn. 2.1093(d)(2), and these tests did not produce evidence of violations of any FCC rules regarding maximum RF exposure levels.”

The report made by The Chicago Tribune led to Fegan Scott law firm conducting its own investigation. Just last week, its laboratory also discovered that the federal safety limits were exceeded by iPhone models. The law firm filed a lawsuit against Apple as it claimed to use actual conditions, whereas Apple used “conditions set by manufacturers.”

They did not go into much detail on its testing methods. But now that the FCC’s own research and testing has provided results that worked in Apple’s favor, the lawsuit could be junked.

For the full results of the FCC’s findings, you can read this document.

Sprint's Virgin Mobile brand no longer operating in the US