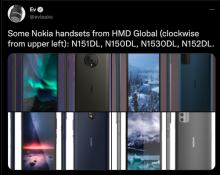 It looks like HMD Global is planning to release new smartphones soon. And the best part about these phones is that they come with an inexpensive price tag.

According to a leak, the Finnish company will soon be releasing a total of four devices. The leak, however, did not talk about the four devices in detail. Instead, it shows some photos of what to expect from the phones.

The first device, the N151DL, is a basic smartphone that comes with one camera, a 3.5mm headphone jack, and a display with a rounded notch. The second phone is codenamed N150DL, which comes with slightly more advanced specs. It features three rear-facing cameras, a rounded form, and a waterdrop notch.

The third device comes as the cheapest option. Codenamed N152DL, it looks like a typical budget-friendly smartphone with one camera and a 3.5mm headphone jack. The front-facing camera sits on the upper bezel.

Lastly, the N1530DL appears to be the top tier among the series. The photo shows a triple rear-camera configuration, a display with a waterdrop notch, and a side-mounted fingerprint sensor.

Right now, that’s all we know about these phones. But it’s possible that HMD Global will be announcing these soon enough.