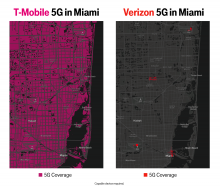 One of the most anticipated sporting events of the year is here once again and it’s taking place in Miami. In line with the Super Bowl event, T-Mobile has already gone ahead and ensured their 5G network can be experienced throughout the whole city.

The event, slated for February 3rd, is expected to be a huge one. With the influx of fans and visitors, it’s only normal for the network to slow down. The Un-carrier wants to make sure that its users do not get to experience frustration with the slow speed.

In a recent press release, T-Mobile revealed that it is making major upgrades to their network infrastructure in Miami. This means that the entire greater Miami area will have 600MHz 5G coverage, along with the millimetre-wave 5G provision at the lower bowl of the Hard Rock Stadium. With these upgrades, T-Mobile is letting users enjoy 5G network not just at the stadium but the whole city.

In its announcement, T-Mobile took a jab at its biggest competitor by showcasing a 5G coverage map. The map shows its edge over Verizon’s 5G coverage in the area.

But unlike the common practice of improving coverage via mobile stations, T-Mobile is installing permanent upgrades to its network in Miami. This way, residents can continue enjoying their 5G network even after the Super Bowl has concluded.

Unfortunately, not everyone will be able to enjoy 5G speeds on their existing devices. In order to fully experience 5G speed, you will need to have a 5G-capable device. And with the number of options that are currently available, there aren’t too many to choose from yet. Thankfully, a new range of cheaper 5G devices will be making its way to the US pretty soon. But unfortunately, they won’t be released anytime before the Super Bowl.