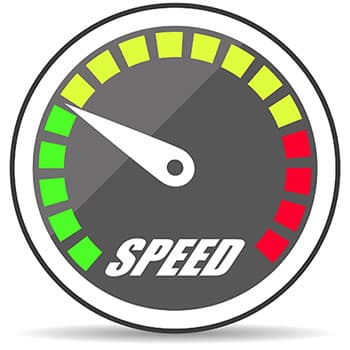 This internet connection speed test checks the speed of your internet connection - along with a good portion of extra details like ping, jitter, upload and download speeds, streaming latency, and packet loss - and gives you comprehensive feedback on which kinds of functions their network is capable of performing. These functions include things like VoIP (or voice over IP), live video buffering on Hulu or YouTube, game playing, and others. In contrast to most internet speed checks, Wirefly's speed test runs without Javascript or Flash. Instead, it employs the more widely functional HTML5, a programming language that enables the test to operate on any device, such as laptops or mobile phones. As the speed test runs, the animated speedometers will activate and supply users with the details of their online connection speed within 30 seconds.

News: See Wirefly's rankings of the fastest cell phone carriers in the United States in the most recent report here.

How to Determine if a Connection is Good Enough for VoIP

The first step is to test the network to determine the speed that it is operating at now. If the results are adequate, then the connection can handle VoIP. Inadequate results, on the other hand, may be fixed by carrying out these tasks:

The speed test on this site is designed to deliver an in-depth report that covers a connection's speed, quality, data packet rate, and other important details. It will help users to gain a clearer understanding of how their existing web connection works and if it can handle VoIP service. If your internet connection is not as fast as you'd like it to be, you can compare internet providers to find a better ISP.

The Components of a High-Quality Internet Connection

Determining the speed of a connection is absolutely essential, because the findings will allow you to identify what applications it can effectively support. In basic terms, these speed test results indicate how quickly information passes through a network. This is particularly vital for VoIP service, which requires a strong web connection to transmit, assemble, and receive packets of information, which are then converted into sound files.

Another important factor to look at is the kind of VoIP service that is required, namely either business VoIP or residential VoIP.

With business VoIP, it's essential to consider how a connection's bandwidth is allocated. A network's devices must all share bandwidth, and as a result, the greater the number of devices or employees tied into a connection, the more slowly that connection will execute tasks.

What the Speed Test Results Indicate

Once the speed test has run, users are supplied with several different results for different measurements. Below is a brief explanation as to what your test results mean in relation to your current broadband connection:

In order to achieve maximum internet speed efficiency, users must have a dependable and fast-speed web connection. With that in mind, there are a couple of steps that can be taken to enhance an existing web connection and make sure it's running at the quickest speeds achievable: