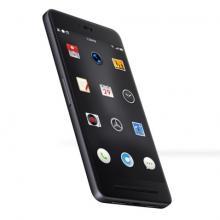 Not many have heard of Smartisan before, and that is pretty understandable. This China based phone maker is, after all, only a little more than three years old. But so far in its brief existence, the company has already managed to launch two mobile devices -- the premium range T1 smartphone, and the more budget friendly U1 handset. These devices may not be household names but those who had the opportunity to review or purchase any one of the handsets were enamored by the rather nifty user interface features that Smartisan had incorporated in its first two smartphone offerings.

Nineteen months after it first released its flagship device, Smartisan now presents a follow up, and it is called the T2. This time around, the Chinese mobile manufacturer is offering a stylish metallic finish, albeit the unique features and functionalities have been toned down a bit. For those who are expecting more improvements compared to the T1, know that in the T2, Smartisan is going for minimalistic elegance instead of trying to bulk up the specifications. The result is a sleek handset that breathes style and simplicity.

What makes the Smartisan T2 device so clever is that it does not come with any power button, visible screw, nor discernible SIM card tray. The device does not even have no plastic bands on its seamless and perfectly rounded all metal unibody frame. With its 100 percent smooth bezel, Smartisan’s T2 handset is the first Chinese made smartphone to feature a fully seamless metallic frame.

So how does the T2 compare with the T1? The T2 handset is the thinner and lighter option, and it does not have a removable back cover just like the T1 (which covers the SIM tray, and could even be customized). So how does one access the SIM tray on the T2? Just poke a pin into the hole on the right section, and the tray should pop out. What about the power buttons? That functionality is now handled by the home key.

With regards to specifications, the Smartisan T2 handset features a 13 megapixel f/2.0 camera on the rear side and a 5 megapixel camera on the front side. The device is powered by a six core Snapdragon 808 processor (2x Cortex A57 at 1.82 GigaHertz; 4x Cortex A53 at 1.44 GigaHertz), and a 2,670 mAh battery. This is further supported with 3 gigabytes of random access memory (RAM), plus either 16 gigabytes or 32 gigabytes of onboard memory. Software wise, the Smartisan T2 device runs on the new Smartisan OS 2.5, which is based on Android 5.1 Lollipop. The device is priced at around $385 for the 16 gigabyte edition or about $400 for the 32 gigabyte variant.