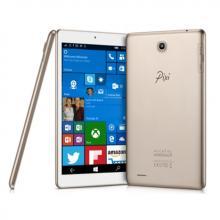 During this year’s Consumer Electronics Show (CES 2016) held at the city of Las Vegas in Nevada, Alcatel OneTouch took the opportunity to introduce a full new series of smartphones (PIXI 4), a new tablet device that is powered by the Windows 10 Mobile operating system (PIXI 3), and a parenting focused GPS tracking device (CareTime Children’s Watch).

First off, the new PIXI 4 family of smartphones. This new series of handsets consist of devices with sizes ranging from 3.5 inches to 4 inches to a gargantuan 6 inches. According to Alcatel OneTouch’s press release, these new devices offer an all encompassing user experience stemming from the devices’ design, camera, audio, and battery performance, while keeping their prices comfortably within the entry level range.

As of this writing, no further details have been released yet regarding the new smartphone offerings from Alcatel OneTouch. Still, industry watchers are expecting that the new handsets should all be running on Google’s Android mobile operating system, similar to PIXI devices released by the phone maker in years past.

Alcatel OneTouch also took advantage of the annual CES event to announce a new tablet device, the PIXI 3. This offering marks the first time that the company is introducing a tablet that runs on Windows 10 Mobile, the version of Microsoft’s latest Windows 10 operating system that is designed specifically for mobile devices.

Again, just like the PIXI 4 smartphones, there are no further details yet regarding the specifications and features, not to mention pricing and availability information for Alcatel OneTouch’s PIXI 3 tablet. However, the mobile manufacturer has hinted that the tablet will likely come with global positioning system (GPS), TV remote control, and support for voice calls.

The device offers the capability to transmit voice messages as well as make voice calls. The cool thing about the CareTime Children’s Watch is that its contact list is pre-set, which means that parents or guardians can rest assured that the children will communicate only with them or people they know. The wearable device functions with a mobile app that allows people to determine the exact coordinates of children via a GPS locator functionality. If children ever stray from their expected set zone, the device will also notify the parent or guardian.

Curious about existing Alcatel devices? You can start comparing phones and plans from Alcatel at Wirefly now.