Apple Posts More Than $1.1 Billion In App Store Revenues Over The Holidays 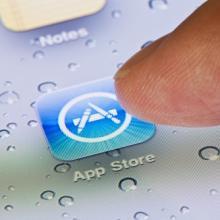 Apple also had a pretty good holiday season, in terms of sales generated from its App Store. As a matter of fact, the iPhone maker actually posted record revenue numbers during the last month of 2015. Just this week, the mobile giant reported that iOS users spent over $1.1 billion on mobile apps and in-app purchases over the holidays (ending in January 3rd of 2016), and in the process achieving new records not only in the volume of purchases but also in traffic at the App Store.

New Year’s Day 2016 is now considered the most profitable day ever in the history of the App Store. On the first day of the new year, iOS mobile device owners everywhere spent over $144 million on purchases, easily surpassing the previous record set just a week earlier on December 25th in 2015. As for the entire year of 2015, revenues generated from the App Store amounted to over $20 billion. It should be noted that Apple receives a cut of 30 percent of each $1.00 spent at its online app store, which is equivalent to a take of around $6 billion.

Make no mistake about it, Google’s Android mobile operating system is still the most popular and widely used platform in the world, especially in terms of sales of devices that run on it, global market share, and even volume of mobile app downloads. But when it comes to sales of mobile apps, Apple normally takes the lion’s share. It has been proven in recent years that owners of Apple devices such as iPhones, iPads, and iPods tend to spend more cash on mobile apps and games.

The most popular categories at the App Store in 2015 were gaming, social networking, and entertainment. Indeed, the past year have seen best selling titles such as Minecraft: Pocket Edition, Clash of Clans, Monster Strike, Trivia Crack, Netflix, Hulu, Facebook Messenger, WeChat, and Snapchat, among many others, take the app world by storm. Also contributing to Apple’s success this past year was the introduction of its Apple Watch and Apple TV products, which also ushered in new apps (or created demand for existing ones) in the App Store.