How TextNow Wireless Is Helping Students Get Connected 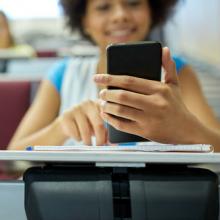 As another school year begins, kids are now once again heading back to school and their parents or loved ones will now have to worry about how to keep in touch with the children while they are off to school or college (sometimes out of state or country). The good news is that as cell phone devices continue to become as readily available as never before, a growing number of wireless carriers are targeting both parents and their student kids with budget friendly plans.

You can include TextNow Wireless among these service providers. In recent years, the company has built quite a following for the way it marries cost effective plans with flexible options. On top of that, its free TextNow mobile messaging app has attracted users by granting them the ability to transform any Wi-Fi connected device into a handset that allows customers to make phone calls free of charge and send text messages using their phone number. The app has already reached 13.5 million active users every month, while becoming one of the top free apps for Android and iOS users.

Parents can certainly appreciate the advantages of what TextNow Wireless brings to the table. In terms of savings alone, the carrier’s plans are easy on the budget, with prices starting at $13.99 a month, with annual cost as low as $168 a year.

And the service itself is designed to be adopted easily by first time owners of smartphone devices. As for the TextNow app, it comes preloaded in the TextNow powered handset, and all forms of communication are done directly through the app. For parents, they can set up their kid’s account by using their email address, and even configure the account to forward every text message received by their kid’s device.

Speaking of devices, TextNow Wireless also offers a variety of handsets that parents can choose for their children. Because some kids are first time smartphone users, one can expect their devices to take some damage, or even get misplaced on a busy school day. This is why TextNow prices its devices as low as ten bucks. For those who want to get a familiar smartphone brand, they can opt for an LG Tribute 5 unit, which is easy to use and only costs less than $40. Or if parents have a existing extra device already, they can just insert a TextNow SIM card and have their kid use that handset when going to school. And if one forgets his TextNow phone at home, he can still have access to text messages and voicemail via the Internet.

Tip suggests Motorola is working on smartphone with 200-megapixel camera