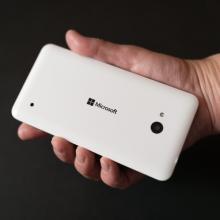 When it comes to releasing smartphones, Microsoft has not had much success. The company may still be considered a giant in the software industry, but establishing a solid presence in the smartphone industry has proven to be a far harder task. It has only been barely over a month since Microsoft launched the Lumia 950 and Lumia 950 XL smartphones, but these devices are just not killing it in terms of sales. Still, these two smartphone offerings (introduced back in October earlier this year) may be nothing more than just stepping stones to a far more ambitious smartphone project for the company.

During a Windows Weekly podcast, Chris Capossela, the Executive Vice President and Chief Marketing Officer of Microsoft, announced that the company is currently busy building a smartphone that should spell breakthrough success for the company in the smartphone industry, in the same way its Surface line of products has done for the laptop industry. Capossela remained mum on whether or not the new smartphone will be part of the Surface line, but has made clear that the handset will not be grouped with Microsoft’s current Lumia smartphone options.

It is quite possible that Microsoft is trying to introduce a new smartphone that serves as a hybrid device, in terms of combining the capabilities and functionalities of a mobile device and a personal computer. After all, in launching its Windows 10 operating system, the company has always been expressing a desire to make its OS all encompassing with cross platform capabilities -- a hybrid smartphone/PC would definitely allow that to happen.

It is not like there is no precedent -- the existing Continuum feature present in the Lumia 950 and Lumia 950 XL has the ability to produce a desktop-like when connected to a separate monitor and peripherals, complete with a task bar, mouse control, and support for keyboard shortcuts. Granted, the Continuum feature only supports Microsoft mobile apps, but this could be a stepping stone to creating something more expansive.

Microsoft managed some success by introducing hybrid tablets via its Surface line of products. Can the company do the same with the “breakthrough” smartphone it is building now? Nothing is certain in the smartphone industry, but unpredictable shifts do happen from time to time. Case in point: who would have thought that Nokia would lose its dominance to Samsung, which a decade ago was not actually known for making cell phones? Can the same thing happen to Microsoft? We will all just have to wait and see.