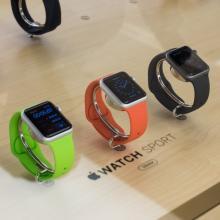 The Apple Watch is considered the most popular smartwatch in the world right now, and has contributed so much in making more casual consumers aware that smartwatches, among other wearable devices, can be cool. But there are still those who are reluctant to buy even the most celebrated of all smartwatches, maybe because they find the Apple Watch inadequate, or maybe because they’d prefer waiting for the tech to further develop.

For those who go for the latter, they may be delighted to know that the second generation (and surely improved) Apple Watch is currently in the development stage, at least according to a report by a China based news website. The news report indicated that during an investor’s meeting held in France, Barry Lam, the chairman of Taiwan based tech company Quanta Computer (Apple’s manufacturing partner for its one and only wearable device to date), stated that the next version of the Apple Watch is already in the works, and should be ready by 2016.

Now, to be clear about it, the news report never mentioned the specific enhancements that people can expect for the second generation Apple Watch. Instead, what the report basically offered was a relaying of Lam’s statement that the next version of the Apple Watch is coming next year, and for sure, it will come with various improvements, particularly in terms of hardware and software.

Apple first launched the Apple Watch back in April earlier this year, and one can say that the rest is history. Not only did the Apple smartwatch become the most promoted wearable device ever, it also managed to push the wearables industry into places it has never gone before. And even though smartwatches and other wearable devices have not quite reached mainstream level yet, the Apple Watch has galvanized the industry, spurring other tech companies, such as LG, Samsung, and Motorola, to also push their smartwatch offerings, some with improved features and technology. The result is that mobile users now have more options for smartwatches than ever before.

Since the Apple Watch is the iPhone maker’s first attempt at making a wearable device, the smartwatch naturally comes with limitations. The more obvious of which is the fact that for all the advancements in smartwatch technology, the Apple Watch still can not fully function independently without being paired with an iPhone.

Could the second generation Apple Watch fix this? It is too early to tell for now, although industry watchers and casual consumers alike will definitely expect the next version of the Apple smartwatch to come with better specs in terms of hardware, battery life, size, processing performance, and key features.

Apple is certainly starting to lay the groundwork for a better Apple Watch. Back in September earlier this year, the company launched WatchOS 2, the second version of its operating system designed specifically for wearable devices. The release of WatchOS 2 brought the ability to enable more mobile apps to run directly on the Apple Watch instead of needing an iPhone, plus new watch faces, and other cool features.